Everything Could Be Awesome: Five LEGO Themes I’d Like To See

When my older daughter was a toddler we bought her some Duplo. She loved it, we loved it: It’s way more fun to play Duplo with your child than other stuff they like to do like crying or moving their bowels at random times in random places. Between gifts and garage sales, I soon had access to my body weight in Duplo, enough bricks and figures to recreate special moments from TV and the movies! 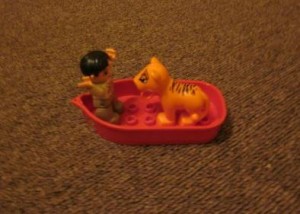 “Yours, mine! You understand?”

Then the LEGO Lord of the Rings was announced, followed by The Hobbit, of course. There were superheroes, Harry Potter, The LEGO Movie, HEROICA board games, and the ever present Star Wars LEGO theme released a new Mos Eisley Cantina set (featured in my LEGO stop motion short, Wretched Hive).

You never know what the next cool theme will be but here are five LEGO theme ideas that I would like to see:

The LEGO Scooby-Doo theme just came out and it’s quite popular, what better Hanna-Barbera follow-up than the town of Bedrock? The Flintstones House with Family Car, The Rubble House, The Rock Quarry with Mr.Slate, The Bowling Alley, The Gruesome Family: There are lots of great scenes to recreate!

Not just because they made Simpsons LEGO, but, seriously, they already made Simpsons LEGO! We have the technology. What makes the Simpsons mini-figure series enticing is the vastness of the cast of the show. Well, look no further than the 31st Century. Besides full sets like The Planet Express Building, Planet Express Ship, Fry’s Apartment, etc., the potential for collectible mini-figures is, wait for it, out of this world! Literally, like Omicron Persei 8.

Also not pictured: You, crying because I just reminded you about Fry’s dog

Like the Ninjago theme but with less Spinjutsu (I don’t know what that means either). Bruce Lee, Jackie Chan, Jet Li! Iconic scenes from classic kung fu movies! Han’s Island from Enter The Dragon, Sifu’s House from Drunken Master, Rooftop Training and Fish Market Battle from Ip Man 2, and then every character and location from all the Kung Fu Panda movies and TV shows. Is that too much to ask for? No. No, it isn’t.

“Be water, my friend”

The Films of Wes Anderson

With the exception of  Lincoln, Shakespeare, a few athletes and race car drivers, there are relatively few real people represented in LEGO. Let’s dream big (well, mini, but still big). A Terry Fox mini-figure, with proceeds going to cancer research, would be a way for LEGO to make a themed charitable donation that would excite people wherever Terry’s Marathon of Hope is remembered and commemorated in annual Terry Fox Runs (Spoiler: That would be…world wide!).

“Even if I don’t finish, we need others to continue. It’s got to keep going without me.”

So, there are five LEGO theme ideas I like to daydream about but will any of them become a reality? Shmaybe. The Flintstones would have the best chance of becoming a theme, especially if there is a movie or TV reboot. Futurama, probably not, but I could see a one-off LEGO Ideas Planet Express Ship set. A Wes Anderson official theme? No. Just no. But in the hearts and minds of MOC (My Own Creation) builders on the internet…yes indeed! LEGO most likely feels it has the martial arts covered with Ninjago, but who knows? Maybe one day there’ll be a Shaolin Monk in a mini-figure series. If LEGO doesn’t make a Terry Fox mini-figure to raise money for cancer research you can make your own and then donate to the Terry Fox Run.

Are you down with bricks? Got your own LEGO theme ideas? I’d like to hear from you, so: Freak out! Scrawl a rambling message on a scrap of parchment, drink a bottle of sarsparilla, dry the inside of the bottle with a silk handkerchief and a chopstick from the dollar store, put the parchment in the bottle, plug the bottle with a cork, and throw it in the ocean. Then comment below telling me which ocean you threw the bottle in and I will go to the appropriate shore to wait for your message to come in on the tide.