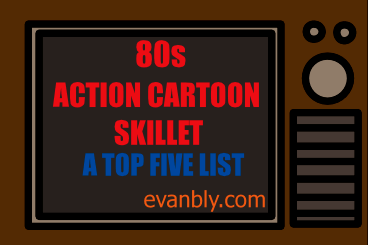 Do you remember running through the grass, skipping stones, eating dirt, blah, blah, blah, childhood nostalgia, blah… Sure, me too.

Do you remember TV?! Of course you do! It was so great! Lasers! Vehicles! Robots! Cartoons! Cartoons! CARTOONS!

Well, as a perpetual man-child and animation fiend, I feel I am super-qualified to present to you…THE FIVE BEST ACTION CARTOONS OF THE 1980s!

Disclaimer: The author of this post grew up rural with 3 channels (4 if you count the French channel, which, really, who counts the French channel?) and would have watched every cartoon available to him but not every cartoon made it out there so this post could be described as “subjective” and “opinion-based” and “full of useless quotation marks”.

5. He-Man and the Masters of the Universe

The classic Filmation series features several great action cartoon tropes: Lame dude becomes awesome with the help of magical object/secret identity (Prince Adam doesn’t even wear Clark Kent glasses, he is just straight up He-Man in more clothes), other world, Eternia, is an odd blend of technology and medieval life (everyone lives in a stone castle with a moist dungeon but flies around on hoverbikes), a supporting cast of characters like Beast Man, Stratos, Man-E-Faces, Ram Man, Orko, Skeletor (of course), and many more, all of whom were ten times more interesting than the main protagonist (See also Harry Potter and Orange Is The New Black). Favourite hero: Cringer, the cowardly true identity of He-Man’s Battlecat. Favourite villain: Mer-Man, Skeletors whiny amphibious henchman. Side note: Episodes featuring Skeletor were not shown in France because his skull face was considered too scary.

Not as edgy as the original comics but the 80’s cartoon about four heroic martial artist turtles living in the sewer was packed full of action, adventure, and Uncle Phil (James Avery R.I.P.) from Fresh Prince as Shredder. The turtles’ core character traits were all present, Leonardo the leader, Donatello the technician, brooding Raphael, and fun-loving or “party dude” Michelangelo, and they ate a shell-load of pizza while battling the Foot Clan, Krang, Rat King, and Shredder himself. Throw in feisty reporter, April O’Neill, and wise Master Splinter and all character arch-types are accounted for. Favourite hero: Donatello, whooping bad guys with a bo staff and fixing all the things. Favourite villain: Rocksteady, the machine gun shooting mutant rhino. Side note: Is cowabunga in the Oxford Dictionary yet?

The Central Organization of Police Specialists was comprised of various dudes representing traditional police roles with futuristic technology (ie, the K9 officer, Bowser and his robot dog, Blitz). While the C.O.P.S. were cutting edge, the Crooks were throwbacks to 1930’s gangsters with a few upgrades here and there. Favourite hero: Officer Highway, a traffic patrol officer on a flying sled. Favourite villain: Buttons McBoomboom, a mob hitman in pink zoot suit with machine guns built into his chest and cello case full of trouble. The tagline Fighting crime in a future time was featured but since they weren’t time travelers they were really just fighting crime in their own present which was only the future to us. Side note: The C.O.P.S. toy line featured weapons that used flat paper caps to create a loud flashing bang that moms hated and a burning smell that kids loved.

2. Visionaries: Knights of the Magical Light

When technology fails on the planet Prysmos, society reverts to a medieval agrarian village model, which seems excessive but what can you do? The wizard, Merklynn, besides avoiding copyright infringement, spends his time gifting out magical abilities to those who meet his high standards of skill and character, which for some reason includes an even number of altruistic heroes (The Spectral Knights) and murderous criminals (The Darkling Lords). The Visionaries each are given a magical animal totem, based on their personality, which they can transform into as needed, as well as special power staff abilities like Wisdom, Knowledge, Destruction, and Fear, or the ability to drive old vehicles. Favourite hero: The Capture Chariot driver, Feryl, with the ability to transform into a wolf. Favourite villain: Lexor, the cowardly mercenary that can turn into an armadillo then roll away and hide when there is trouble. Side note: The toy line for Visionaries featured holographic stickers to give the characters their totems, power staffs, and vehicle features. It was out of this world. Literally, they were not from here they were from Prysmos.

Honourable Mentions: MASK, if G.I. Joe rode the Transformers and had a theme song you could dance to. Droids and Ewoks, back when there were only three Star Wars movies, this was how you got your fix on a Saturday morning. Jem and the Holograms, a cartoon about teenage girls who are perpetually getting ready for a Battle of the Bands; the villainous Misfits pretty much tried to kill the Holograms every episode with dynamite, avalanches, and arson. COBRA wishes they were that evil.

Test pilot Jack Bennett was given bionic powers in a secret government program, but when his family is in danger the only way to save them is to give them powers, too! Powers activated by yelling “Bionics On!” and touching a special ring to a special bracelet on the opposite arm. I never did that, though. Definitely not a thousand times or so. The Bionic Six spent their time rescuing people in peril, solving mysteries and crimes, and going head to head with the forces of the evil Dr. Scarab. Scarab just wants to steal the secrets of the Bionic Six’s bionic powers (invented by his brother, Dr. Sharp), live forever, and rule the world, is that too much to ask? His team of mismatched cronies constantly compete with each other for his favour, but also plot to take over the group behind his back. Constantly. Favourite hero: Karate-1, the Bennett’s foster sun, Bunji. Favourite villain: Klunk, Scarab’s most monsterous mutant. Side note: Bionic Six toys were made of plastic (both transparent and opaque) and die-cast components, so they are light-weight yet heavy as guff.

By the Power of Greyskull, this is a very personal list! I’m sure you have your own radical favourites, dude! If you want to solve “The Case of the Missing Comment” just follow these simple steps. Allow 3 moons to align forming a technology-nullifying eclipse. Then, earn the magical totem of a rat by impressing a wizard with that sweet scurrying move of yours. Transform into a rat, enter the sewers but DO NOT MUTATE, you need to stay rat small so you can swim into my toilet. Swim into my toilet (around 1:00AM should be safe), run into my office (my dog might chase but probably can’t catch you on account of he is a dillion years old and an amputee) and type your favourite 80s action cartoon on my computer. Then scratch my face until I wake up and read your message (and unfortunately, try to smush you with a mallet).